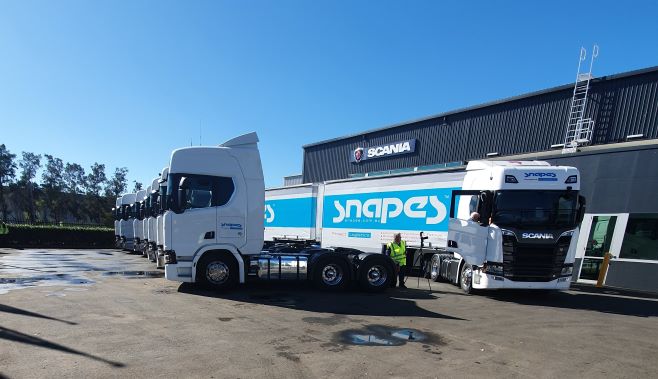 The company runs dedicated singles, B-doubles and rigid truck and trailers up and down the East Coast of Australia, a major factor in its investment in Scania’s powerful Euro 6 V8 technology.

For Snapes Project Logistics the investment is about the business upgrading its current assets and reducing the cost of hiring equipment minimising the ongoing maintenance costs associated with the fleet.

The new vehicles will be paired off on dedicated services each in Victoria, New South Wales and Queensland where they are delivering full and part loads of furniture and fittings for commercial businesses.

The prime movers have front and rear airbags to give the freight a softer ride according to Jeff Lees Snapes Project Logistics General Manager.

“Everything we do is now air ride,” he said.

“We’re running both front and rear airbags on suspension. So, it’s all about the safety of the product we move and making sure that there’s no damage in transit keeping our customers and their customers happy, this is in line with our company values.”

This is achieved with customised mezz-deck trailers, in which the hydraulic floors make the use of a forklift unnecessary. These have been fitted with lock-in gates so that product is secured with load rated curtains.

“We’re expanding all the time and trying to offer a service across the entire East Coast of Australia and making sure we have our own equipment in place to do that,” said Lees. “We run anything from rigids right up to B-doubles.”

The company, which has been in operation since 1932 has partnered with Scania for around 30 years. It’s prime movers and rigids are all produced by the Swedish truck manufacturer.

It maintains offices and depots in Melbourne, Sydney, Brisbane and Perth, where it consolidates customers product for intra and interstate transport.

Lees said Scania had remained a long-term partner through its reliability and accountability.

“We rarely if ever have a breakdown, but if we do Scania are always there,” he said. “They really back up their units.”

An operational priority is its ability to manage the fleet completely while keeping its trucks on the road and reducing operating costs through service and reliability, according to Lees.

Snapes also keeps its maintenance contracts with Scania to ensure its costs are reduced and the fleet is maintained to the highest standard in line with chain of responsibility commitments.

The feedback in terms of fuel consumption and idle time, according to Lees, helps the business monitor daily operations and saves money on fuel.

In recent months Snapes has altered its linehaul task into Queensland to accommodate changeovers in Sydney. Previously the company was running drivers from Melbourne to Brisbane over a two-day period. They’ve changed it to manage fatigue better but also primarily to keep the drivers closer to home and their families.

“It’s reduced the number of hours these guys are doing on the road,” he said. “That’s also about trying to stop our drivers going into Queensland even though they are allowed. We mitigate that risk by having our Queensland drivers come out and go back.”

By actioning the changeovers, a driver who leaves Melbourne for Queensland is no longer away for four days. This way he is only away for two.

“We’re looking at ways to improve all the time. The new Scania’s are part of that process,” said Lees. “It’s huge for us. We’ve moved up to the bigger and better model and technology behind these is phenomenal.”
﻿